This adventurous amazing activity is usually started in the morning from the Park offices or staring point after a short briefing conducted by park officials highlighting about how to behave while in the presence of these apes in the jungles.

After briefing, a park ranger guide and armed officers are assigned to a group of eight people to start the journey heading to the jungle following the well-established routes in search of these apes for interaction.

Gorilla trackers are usually the first to go early in the morning to locate where these apes spent their last night and after locating them, they will contact the ranger via radio calls who is leading the group of trekkers informing them on the exaction directions of locating these apes in the Jungles.

After locating these apes in the jungles of Virunga, you are allowed to stay in their presence for only one hour while seeing them playing with young ones, feeding, laughing plus taking photos and videos of them provided you are not using a flush camera, after one hour next step is descending back to park offices for gorilla trekking tour certificate award which is a sign indicating that you have contributed part towards conserving gorilla lives.

After visiting mountain gorillas in Congo, the next adventure holiday in Congo is watching the eastern lowland gorillas in the only known national park of Kahuzi Biega.

After early morning breakfast embark into the safari jeep and drive for 2 Hours to Kahuzi – Biege which is the starting point for these primates excursion.

It is here that you will be briefed about gorilla trekking dos and don’ts before setting off into the forest to track gorillas in Kahuzi Biega National Park for the incredible experience.

During the safari activity of gorilla trekking, will be allowed to stay with the Eastern lowland gorillas for 1 hour for observation and photography as you watch them playing in the wild with their young one.

After this gorilla watching experience, you will return to the park headquarters where you will find the driver waiting for you and straight away you will be driven back to the border. 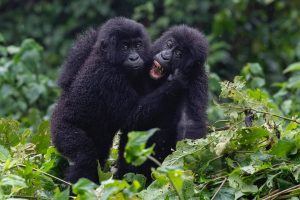