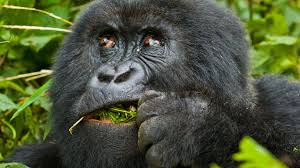 Democratic Republic of Congo is one of the biggest Countries on the African Continent, it’s located in the central part of the African Continent, the official language is French and as far as tourism it’s commonly known for the Shy endangered Mountain and Lowland Gorillas plus Mountain Nyiragongo Volcano in the Virunga Massif. Democratic Republic of Congo is unique among the three countries known for the Gorillas due to its hosting of both Mountain and Low Land Gorillas which is not the same case to Uganda and Rwanda. While on your gorilla tours experience you can either decide to see mountains gorillas in the 3 African countries and then if you still have more money and time you can add on lowland gorillas in Kahuzi Biega National Park in Democratic Republic of Congo.

It covers over 7800 km2 of Area. Visiting Mountain Gorillas in Virunga requires to first buy a gorilla trekking permit which costs $400 USD per person per day and this money is paid in advance before your trekking dates.

For your successful gorilla trekking both in Virunga and Kahuzi Biega National Park you must follow the rules listed below: –

All of the above rules are briefed by the park officials before you head to the jungle and after that you are assigned a park ranger to lead you through the Jungle.

This is the second Gorilla hosting destination in DR Congo. It’s a protected area located in the Eastern part of Democratic Republic of Congo near Bukavu town, it is situated near the western bank of Lake Kivu and the Rwanda border, it covers 6000km2 of Area. This park in Democratic Republic of Congo is commonly known for the Eastern Low land Gorillas as they are only found here, these Lowland Gorillas are very huge when compared to Mountain Gorillas. They weigh up to about 250 kilograms and reach up to two meters by height when standing.

After your gorilla trekking experience either in Virunga or Kahuzi Biega National Park you can join the Great experience of hiking Mountain Nyiragongo Volcano up to the top and sight the night view of its burning Lava. The journey usually starts in Kibati at around 10:00 Am and by 9:00 Pm you will be at the top of the Volcano. 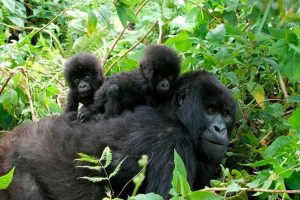