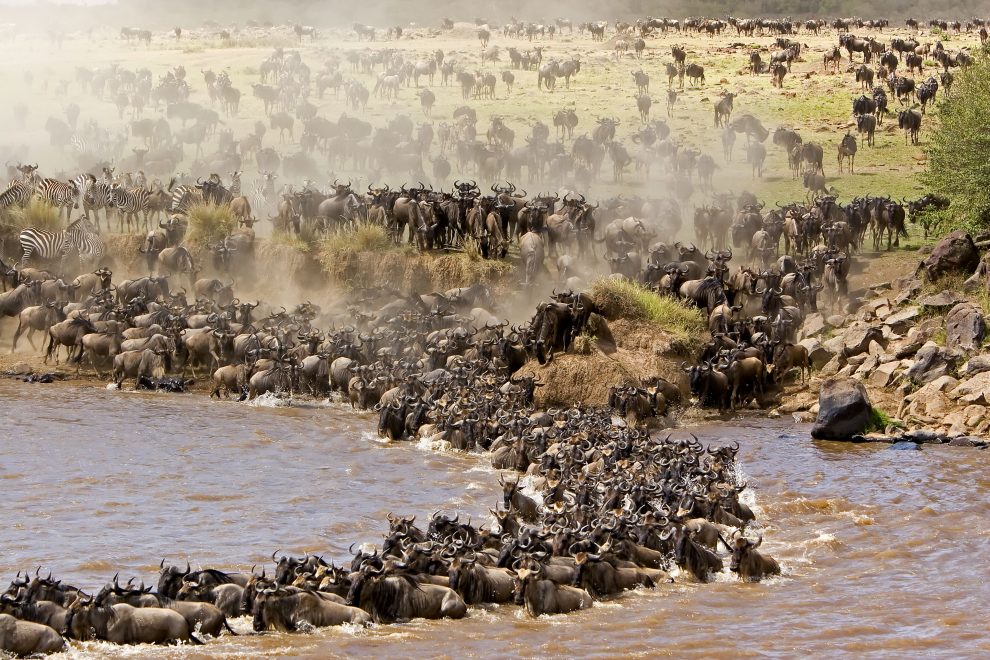 The Great Wildebeest Migration is the annual migration of giant herds of grazers across Northern Tanzania and Kenya is a truly spectacular event. Over two million wildebeest, zebras and gazelles move through the Serengeti and Masai Mara ecosystems in search of green pasture, in a regular pattern. This is surely one of the greatest wonders of the natural world.

The best times to visit The Serengeti Migration is in;

July – October: This is when the wildebeest are in the northern Serengeti plains, and you have a chance of seeing up to thousands crossing the great Mara River. As the sight of the wildebeest crossing the so dramatic, it is considered by many the most desirable time to see the migration while on your exclusive Tanzania Safari in East Africa.

December – March: Currently the wildebeest are in the southern area of the Serengeti, more specifically in Ndutu which is actually in the Ngorongoro Conservation Area, and it is calving season. Along with the river crossings, this is a real highlight of the wildebeest’s journey and a fabulous time to see the herds congregate on the dramatic sweeping plains of the south. February is the only time of year when you are almost guaranteed to see the big herds all together as they always come south for calving season.

The rest of the year: In November, April, May and June the migration is “in between” locations and as such these months are slightly transitional times to see the herds. November is the short rains, April and May are the long rains and as such the grass is green in these months across the Serengeti, so the wildebeest are more dispersed than in the prime time of July – October and December – March. Thus, you don’t get as many of those condensed big herds which people get excited about!

The migration arrives at the Mara River in their tens of thousands and gather, waiting to cross. The result has been shown around the world on numerous nature documentaries and is truly awesome show of the deadly reality this migration faces.

Many adults and calves are lost to crocodile and lion attacks, drowned or crushed by the herd and calves regularly become separated from their mothers on the wrong side of the river, resulting in little hope for their survival. While such a tragic hurdle in the migration may appear to be a disaster for the wildebeest, the deaths only represent a mere handful of the hundreds of thousands of calves born each year.

Without a degree of natural mortality, the wildebeest population could spiral out of control and totally change the balance of this expansive ecosystem in which they perform a lead role.